Rich, creamy and so satisfying all without the dairy. These creamy vegan mashed potatoes have a secret trick that make them next level delicious!

I cannot live without potatoes. Every holiday meal I attend, potatoes is one thing I go back for again. But making a healthy creamy version of the mostly butter laden variety I used to love was a task I had to complete!

I had a few ideas on how to get the often boring tasting vegan mashed potato up a notch, because we all know I don’t do boring. Lucky for me, my multiple trials ended in a perfect result. Lucky for you, I shared the recipe.

I see this question often, basically anything grown from the ground is vegan. It’s a plant and therefore, plant based! But there is a difference when it comes to potatoes and what each kind is best for.

Russet potatoes are high in starch and great when you want something light and fluffy, like mashed potatoes! However these are mild in flavor so take that into account.

White and yellow potatoes have a medium starch level. These are a good all around potato.

Waxy potatoes like red, yukon gold and fingerling are low in starch and hold their shape well when cooking so things like scalloped potatoes, soups, potato salad, etc are great with these. However, I like to use Yukon gold for mashed potatoes because of their great buttery flavor.

What can I substitute for milk in mashed potatoes?

There are many options when it comes to making vegan mashed potatoes, here are a few that I have seen:

However I wanted to make sure that these were the richest and creamiest ever! So I opted for something a little different:

How to Make the Creamiest Vegan Mashed Potatoes

1. First, I wash the starch off of my potato pieces before and after I cook them. This helps with soft fluffiness. Then I mix in the secret trifecta for that base creamy factor.

2. You take all these and stick them in a blender for a thick heavy cream to die for. Then you whip it into the cooked potatoes and BAM. Instadrool.

3. Last you need to top it off with its BFF, my 4 ingredient caramelized onion gravy, for the next next level of amazing.

My son literally had this for his after school snack and I think I saw his eyes roll into the back of his head.

What can I serve these mashed potatoes with? 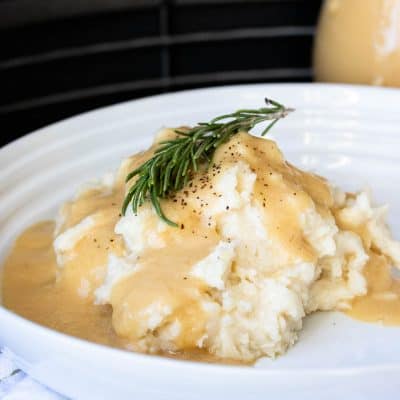