These vegan latkes are so easy and taste amazing! Smother them in traditional apple sauce or sour cream for a treat the whole family loves!

I love quick treats my kids will actually eat. While they opt for ketchup (cue eye roll), these taste amazing with the traditional toppings!

These crispy vegan latkes are so simple to make, and go with so many flavor combinations, making them the perfect dish for any meal any time!

Just a handful of ingredients is all you need to make these vegan potato pancakes!

How To Make Vegan Latkes

Latkes are traditionally served with sour cream and applesauce, which of course is delish, but why not mix it up vegan style?! Try out any of these as a creative topping for your potato pancakes:

In order to achieve vegan potato pancake perfection, make sure to keep the following in mind:

Should you peel potatoes for latkes?

It is absolutely not necessary to peel potatoes for latkes, but if you so desire by all means go for it. No matter what you do, just make sure to wash them first.

Do you have to soak potatoes for latkes?

Soaking the potatoes in water before drying them can help with the crispiness, but it is not necessary. (Because let's be real, ain't nobody got time for that.)

What potatoes are best for latkes?

Most potatoes will do, but russet potatoes are best. They have a high starch content and dry texture, which is what you want for crispy potato pancakes.

Usually, no. Latkes traditionally use egg as binder, but this recipe avoids eggs and is vegan.

What nationality are latkes?

The traditional Hanukkah dish has quite the history. They are believed to originate in the middle ages made with cheese. They evolved to feature potatoes as they became popular in eastern Europe. They are popular in Jewish, Israeli, and American culture.

Still have more potatoes to cook with? Check out these recipes for inspiration: 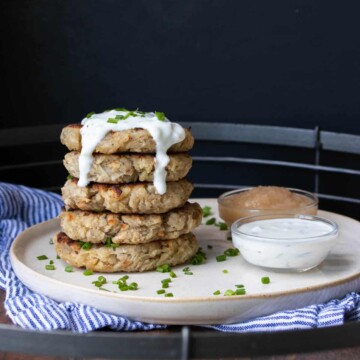