You're going to love this healthier version of vegan gluten-free apple pie! It's made with whole food ingredients and tastes as amazing as the original!

This apple pie recipe is absolutely delicious. From the homemade crust, that tastes buttery and rich but still vegan and gluten-free, to the amazing apple filling. You're going to want seconds! 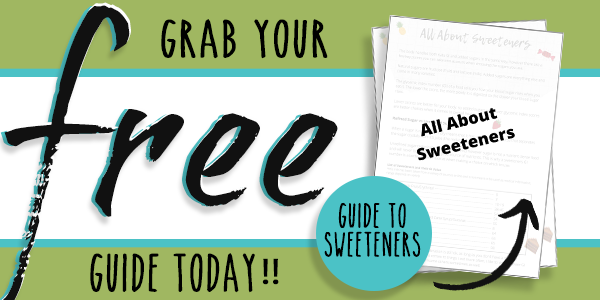 If there's one thing every kitchen needs, it's a recipe for a good 'ole fashioned apple pie! I wanted to make a healthier, gluten-free, eggless, and vegan version of the classic dessert that my whole family would enjoy. Mission accomplished; the only challenge was not eating the entire finished product in one sitting!

Traditional apple pie contains refined sugar and butter or lard. Not to mention the filling and crust generally contain gluten filled flour, which can be troublesome for those who need to avoid gluten. These ingredients contribute to high sugar, fat, and calorie content which isn't exactly healthy.

It's possible to adjust a few ingredients to make your apple pie healthy, or healthier at least! By using plant based whole food ingredients you can reduce the calories, as well as lower the saturated fat. The sugar content is slightly less, but it comes from natural sources which helps to create a healthier apple pie.

Part of the beauty of this pie is the utter simplicity! You just need a handful of healthful, whole food ingredients to keep this apple pie recipe vegan:

What are the best apples to use in apple pie?

Choosing the type of apple to use is a personal preference. Traditionally Granny Smith apples are used, they're firm so they hold up well while still being juicy and flavorful.

If you want a sweeter pie, try using Honeycrisp, Golden Delicious, or Pink lady. You can also use a blend of multiple varieties!

When making any pie from scratch there are a number of steps to take, but I promise each step is easy when you break it down:

This gluten-free apple pie recipe is fabulous on its own, but you can dress it up by topping a slice with Vegan Whipped Cream or Pumpkin Caramel Sauce. Or, make it a la mode with a scoop of ice cream!

In order to create the best vegan apple pie ever, make sure to follow these suggestions:

Most pie crusts are not vegan as they contain lard or butter. Some vegan store bought crusts are available, but I've had great results with my Gluten Free Vegan Pie Crust recipe which uses whole food ingredients.

What pies are vegan?

Many pies can be made vegan, as long as you use a vegan pie crust. Fruit pies, like this vegan apple pie, are the easiest as the fillings are generally vegan to begin with. Pumpkin Pie is another pie that's easily made vegan with a few adjustments.

How do you keep the bottom pie crust from getting soggy?

Fortunately I have not had issues with this recipe and soggy crust. However, if you prefer you can slightly pre-bake the crust. You can also brush on aquafaba as a vegan substitute for the traditional egg white wash, but I don’t feel it’s necessary.

Do you cook apples before putting them in pie?

You can, but it's not necessary. I like my pie with more of an al dente bite, but if you want it super soft, pre cook the apples over medium heat in a non-stick skillet for 10-15 minutes.

Because I LOVE apple pie but don’t have a million years or patience for steps (not to mention 3 kids), I don’t pre-cook and it still turns out great. This recipe in particular doesn't get watery because the combo of maple syrup and cashew butter thicken the moisture from the apples like caramel.

After you're done devouring this gluten-free vegan apple pie you're going to want to make more apple creations! Here are some more fabulous plant based recipes that feature apples as the star: 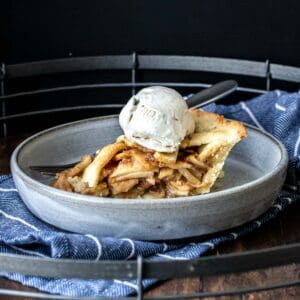