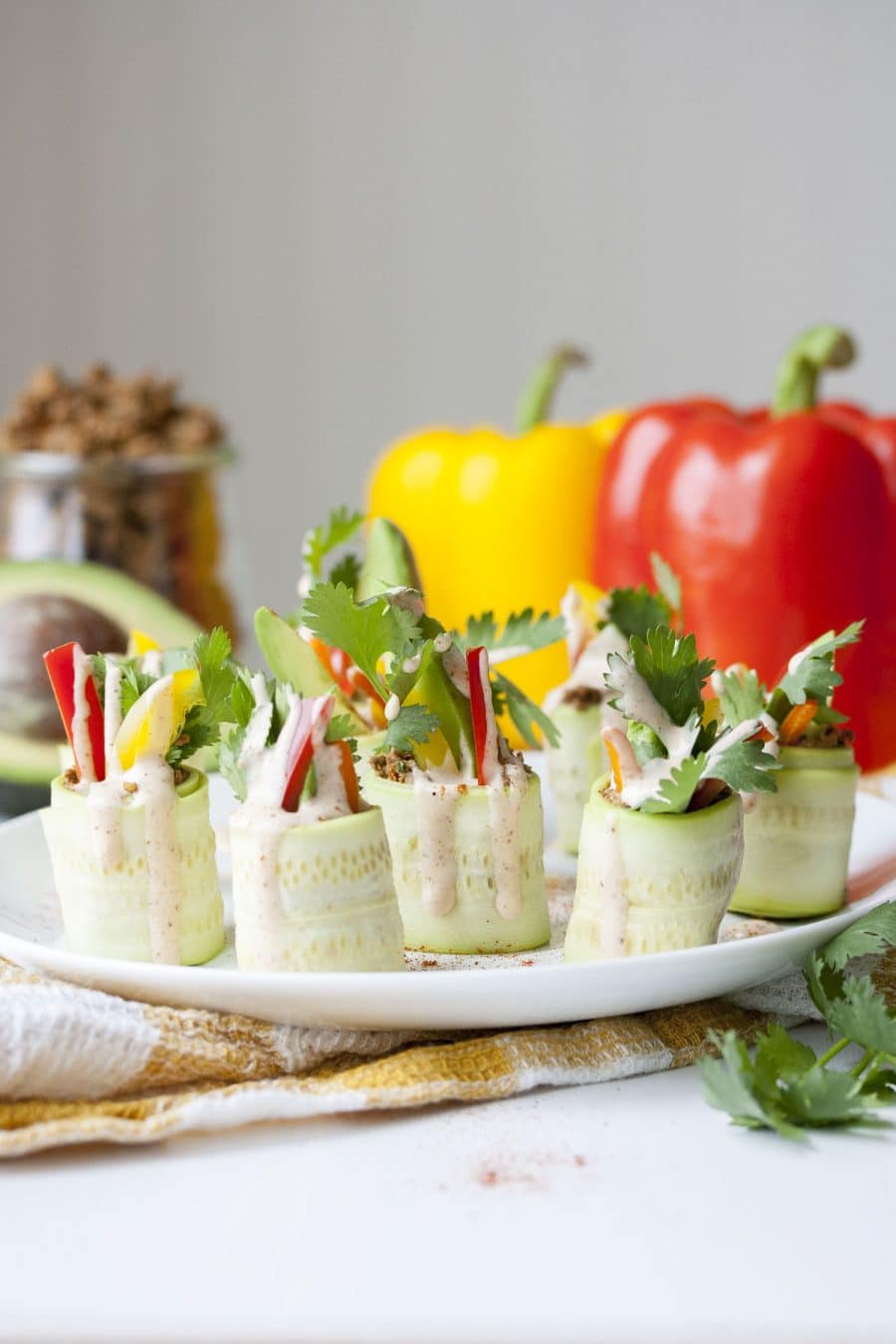 With summer coming and bikini season upon me, I have started to crave healthy raw food (read: crap I stuffed a lot of burgers and burritos into my face these last 6 months while writing my cookbook…) Anyone else feel me? I see you shoving that last bite of pizza in your mouth. Well have no fear because I have created some fully raw, uber tasty, and surprisingly filling and satisfying food for you to balance with those cookies you just baked. 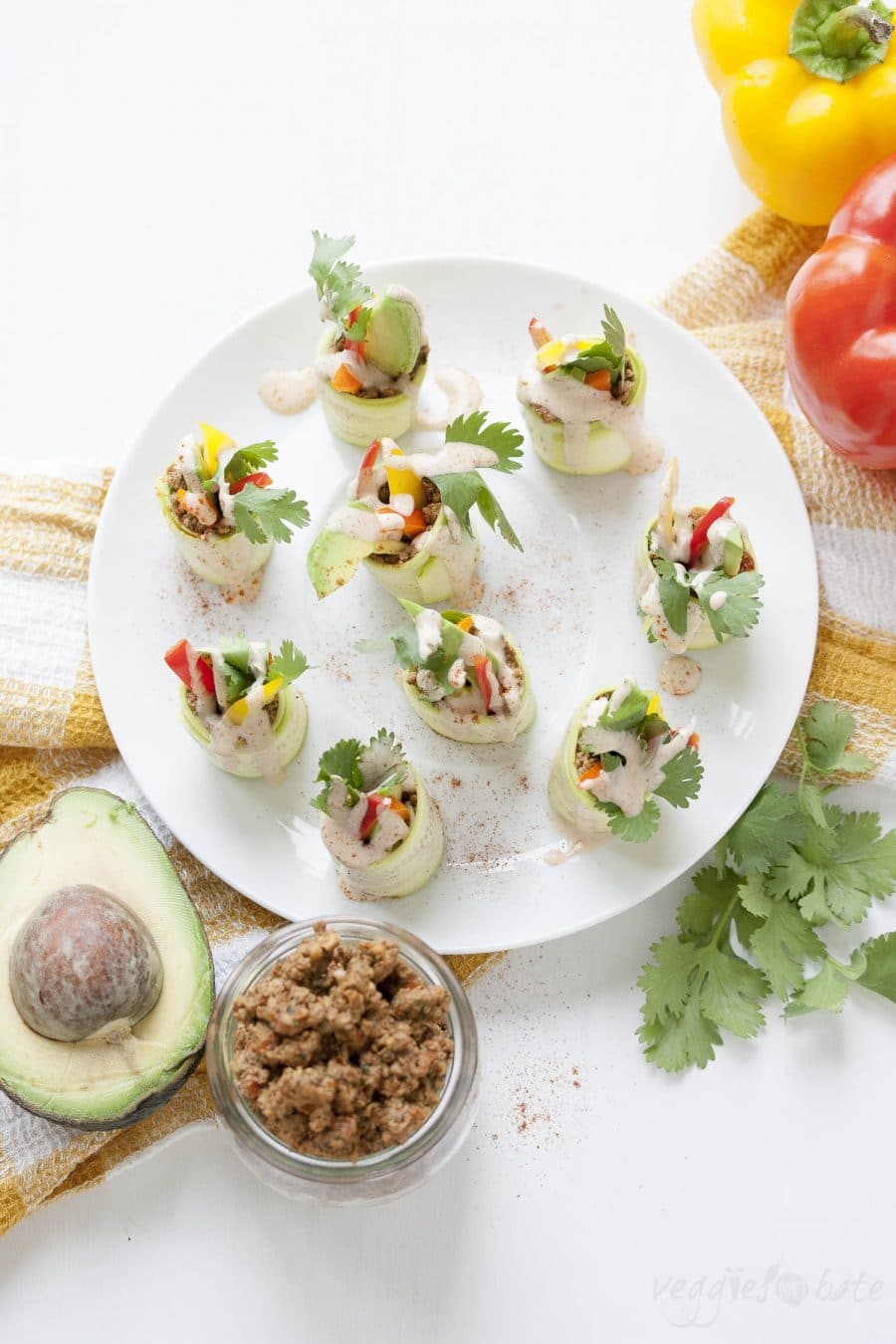 Sidenote, even though I talk about using NOW Foods raw walnuts here, this post is not sponsored. I do work with them and have a post coming soon using one of their new awesome products, but in this post I simply wanted to show you all the nuts that I use. 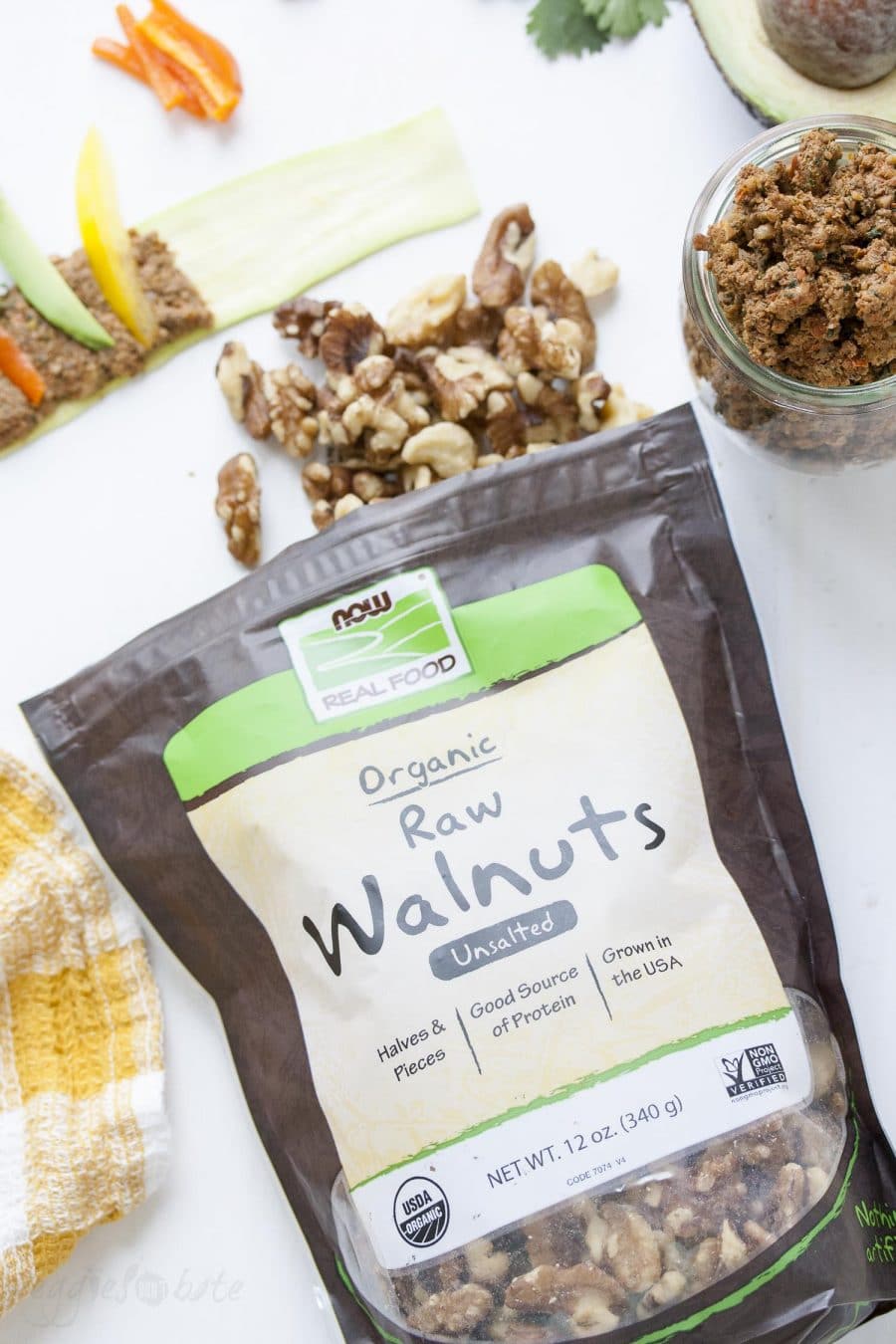 Now that that is settled, let’s move on to your next creative project: raw zucchini roll ups! These are the perfect appetizer, snack, dinner (I ate at least 20 one night)…you name it. They are filled with veggies (duh) and the “meat” filling is AHmazing. I took a creative spin on it, I wanted to do something different than all those other raw meaty crumbles out there, so I decided to add veggies IN the mix! It worked brilliantly! Not only did they add to the texture, but you cannot taste them and so you are getting an even extra dose of veggies for free. Goodbye nacho rolls and hellooooo bikini!!! 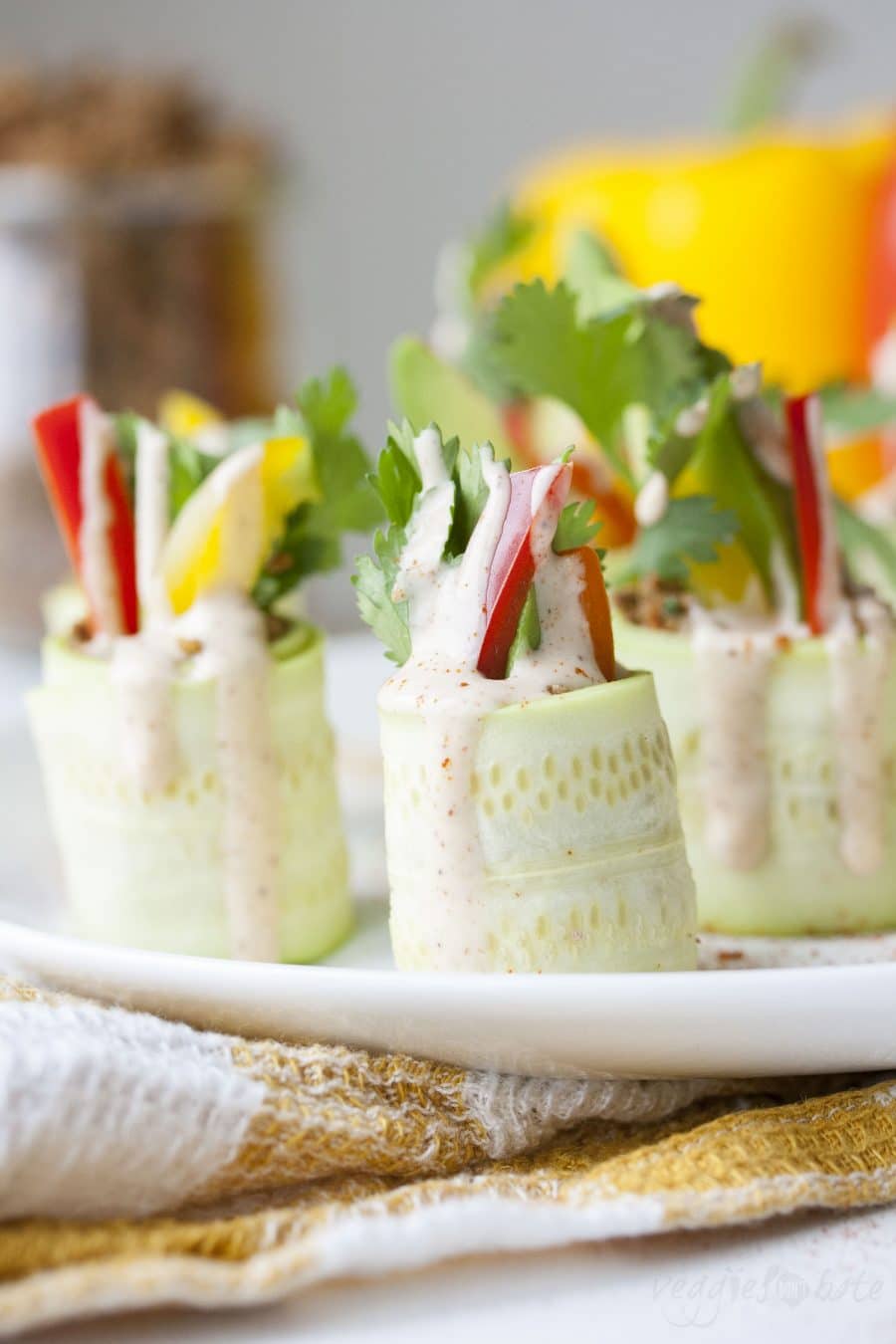 So what did I sneak in? Well, we have the regular raw “meat” go-tos: walnuts and sun dried tomatoes. And then we have my unique additions: zucchini and mushrooms. The key here is that you need to peel the zucchini. This leaves behind the softer, milder in flavor, veggie middle. Plus you add in mushrooms, caps only, and get a powerhouse of a mixture! Both of these add some chewiness to the texture plus give it that uniqueness I was going for. I’m tell ya friends, you need to try this! The sky is the limit on what you can put it on. 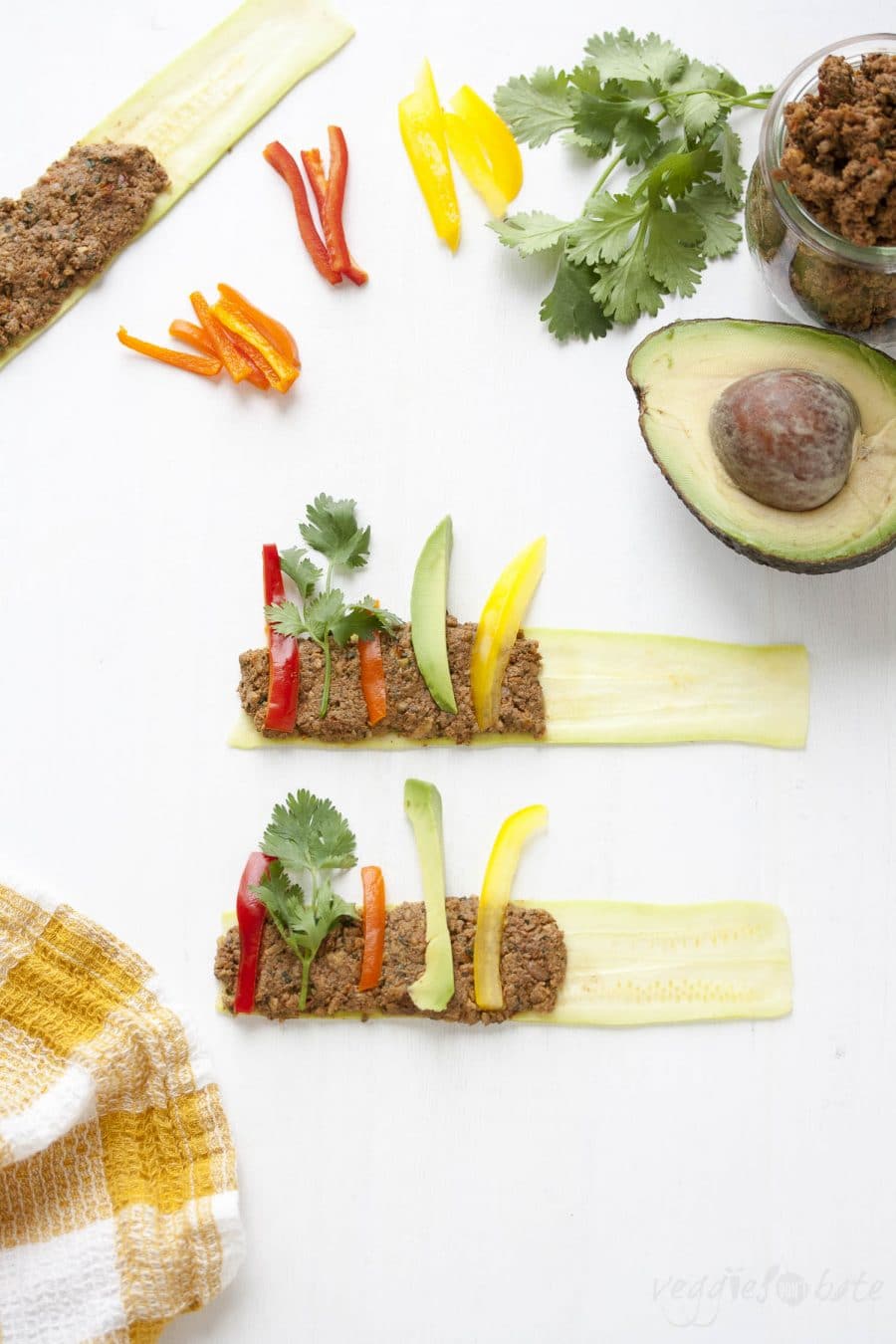 Ways you can use the raw veggie walnut “meat” 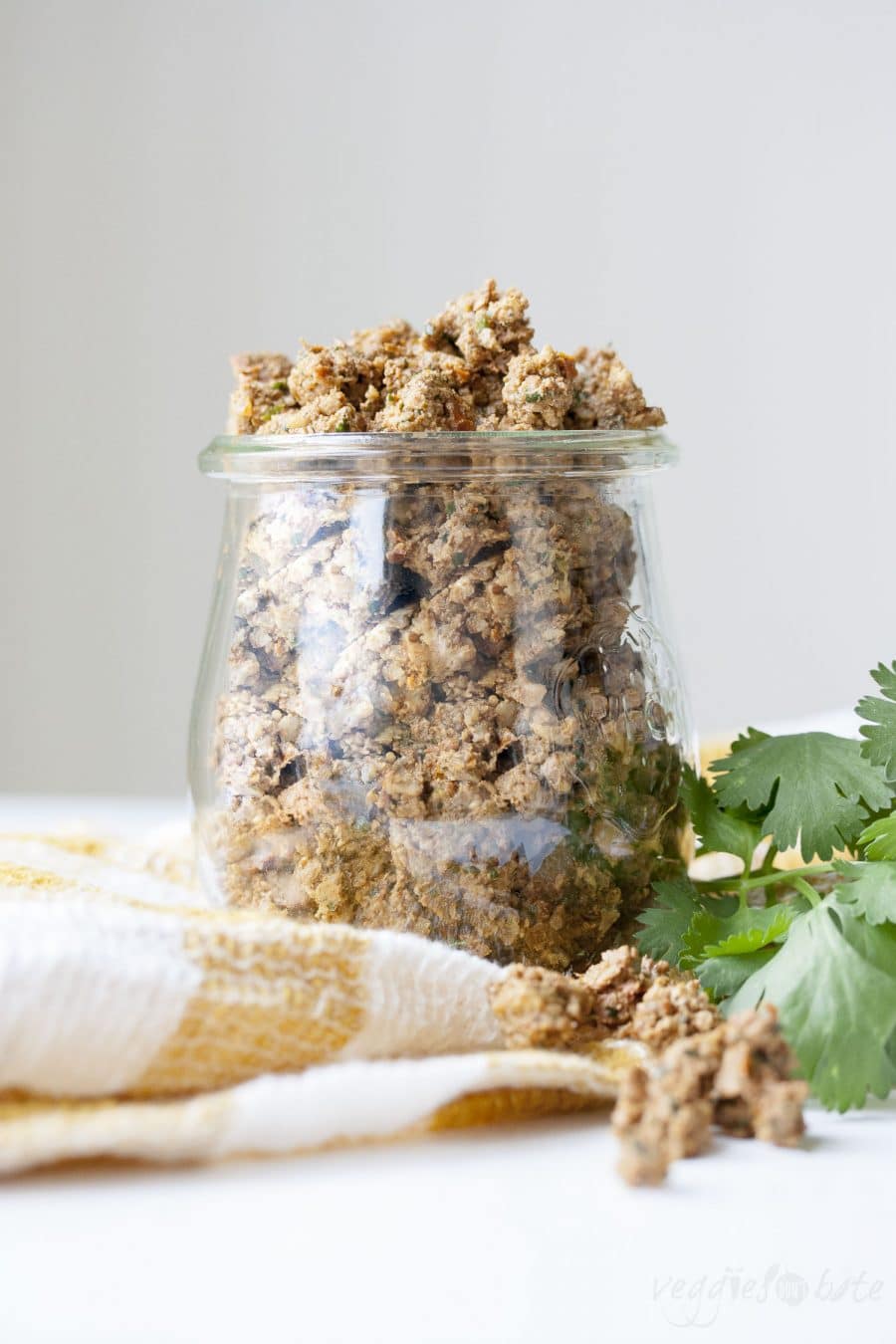 Check out these other great appetizers! 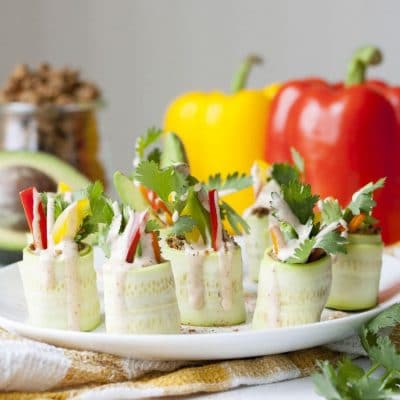 Any variety of mushrooms works but I prefer crimini or baby bellas. The Chili Taco Crema makes 3 cups so you can either half the recipe or make the whole thing to use with other things. Tips to prep ahead: Make meat and crema so all you need to do is put the rolls together the day you are making them. Baby/kid food idea: Cut filling veggies thin and small. Roll them tightly and make thinner rolls. Allow kiddos to dip them into the taco crema (make it mild).

Keyword Easy vegan mexican roll ups
Tried this recipe?Let me know how it was!