This vegan eggplant parmesan will blow your mind. So rich and delicious you will have no idea it is healthy, gluten-free and has no dairy!

I can't believe this recipe is so flavorful and comforting without the dairy and fried factor. Big secret, I am actually not a huge eggplant fan. But OMG I could eat this every week!

It's always great when you find a new way to prepare a food you're not crazy about in a way that is amazingly delicious. I love that I can get the whole family to happily eat such a comforting yet healthy meal.

How To Make Vegan Eggplant Parmesan.

The first thing you'll want to do, at least 20 minutes ahead of time (but you can even do it the day before for a more fabulous result), is coat slices of eggplant in salt and place in a colander so that the moisture is drawn out. This helps to avoid a soggy dish!

Pat the eggplant dry, then get to assembling! Here's what to do:

Top this hearty dish with fresh basil and serve alongside any of these sides:

Keep these suggestions in mind as you're preparing this vegan eggplant parmesan:

What are good sides with eggplant parmesan?

I like to serve eggplant parmesan with a fresh salad and veggies for a lighter meal. Or, with crusty bread and pasta for a more hearty and comforting dinner.

Do you have to peel eggplant before roasting?

You don't have to peel eggplant before cooking, but some people like to, it's a personal preference. You can even peel it while leaving some strips of skin to add some texture without it being too much.

Do you leave the skin on eggplant parmesan?

I like to, it adds a nice texture to the dish, but it isn't necessary.

Can you freeze eggplant parmesan?

You sure can! Wrap the dish up tightly in an airtight freezer safe container and it will keep for up to three months.

Keep smiles on faces and bellies full with these satisfying plant based meals: 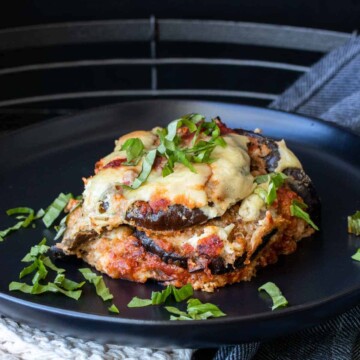 When done, layer in a square baking dish as follows:

Never miss a recipe!Sign up here and get a FREE quick and easy meal guide!
« Does a Plant-Based Diet Work For Athletes?
Healthy Vegan Peanut Butter Cups Recipe »
630 shares