Taking tradition to the next level with these vegan Greek stuffed tomatoes and peppers. These Yemista are a healthy satisfying meal that screams the flavors of Greece! 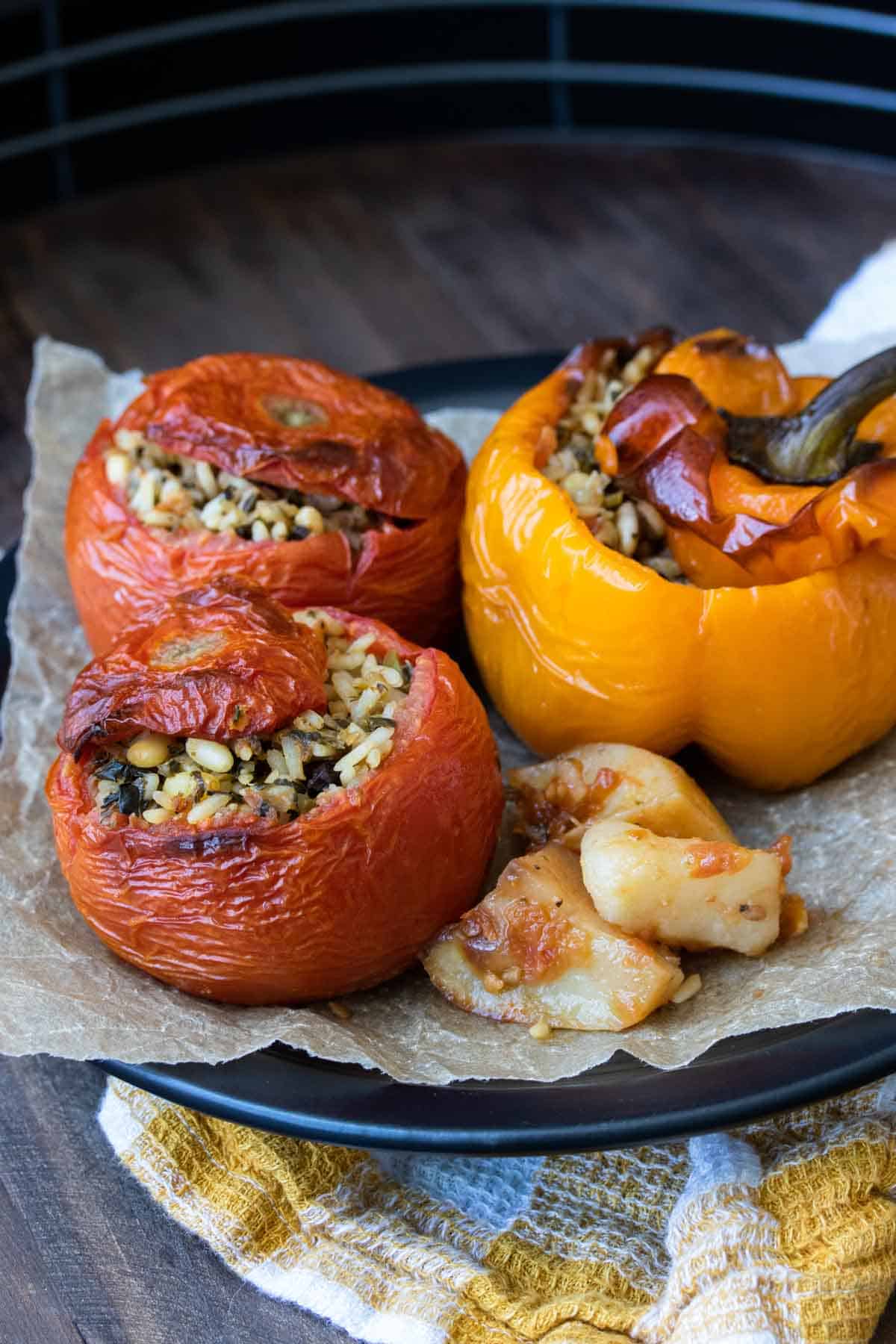 If you know me at all, you know I simply just can’t follow a recipe without putting my own spin on it. Nothing has changed as I get ready to share this amazing Greek recipe from yiayia’s (my mom) kitchen.

When she agreed to help me turn some beautiful garden tomatoes and peppers into one of the most traditional Greek recipes there is, she knew it wouldn’t end up how she originally made it. LOL I learned from the best!

The original Yemista, or stuffed tomatoes and peppers

Traditionally, Yemista can be filled with meat or rice. When filled with rice, they are known to be something you eat around lent. In the Greek religion you abstain from eating meat during lent, so some traditional recipes have two versions. Well, since I don’t eat meat at all, it was natural that I would put my spin on the rice filled version. And that I did!

My mom is hands down the best cook out there. Her Greek meals far surpass those I have had elsewhere, so anytime I post a Greek recipe, it is always based off of her original. My spin on these vegan stuffed peppers and tomatoes, is the added kale.

Because it’s always good to pack greens in when you can. Kale is a hearty leaf so it bakes really well without melting much. You can also use chard as a second choice, however spinach isn’t the best as it is delicate and will melt.

I kept her addition of pine nuts (you can also use blanched almonds if pine nuts are out of your price range), but also added some currants for an extra layer of flavor. Feel free to leave them out if you aren’t a fan, or you can also sub in raisins. 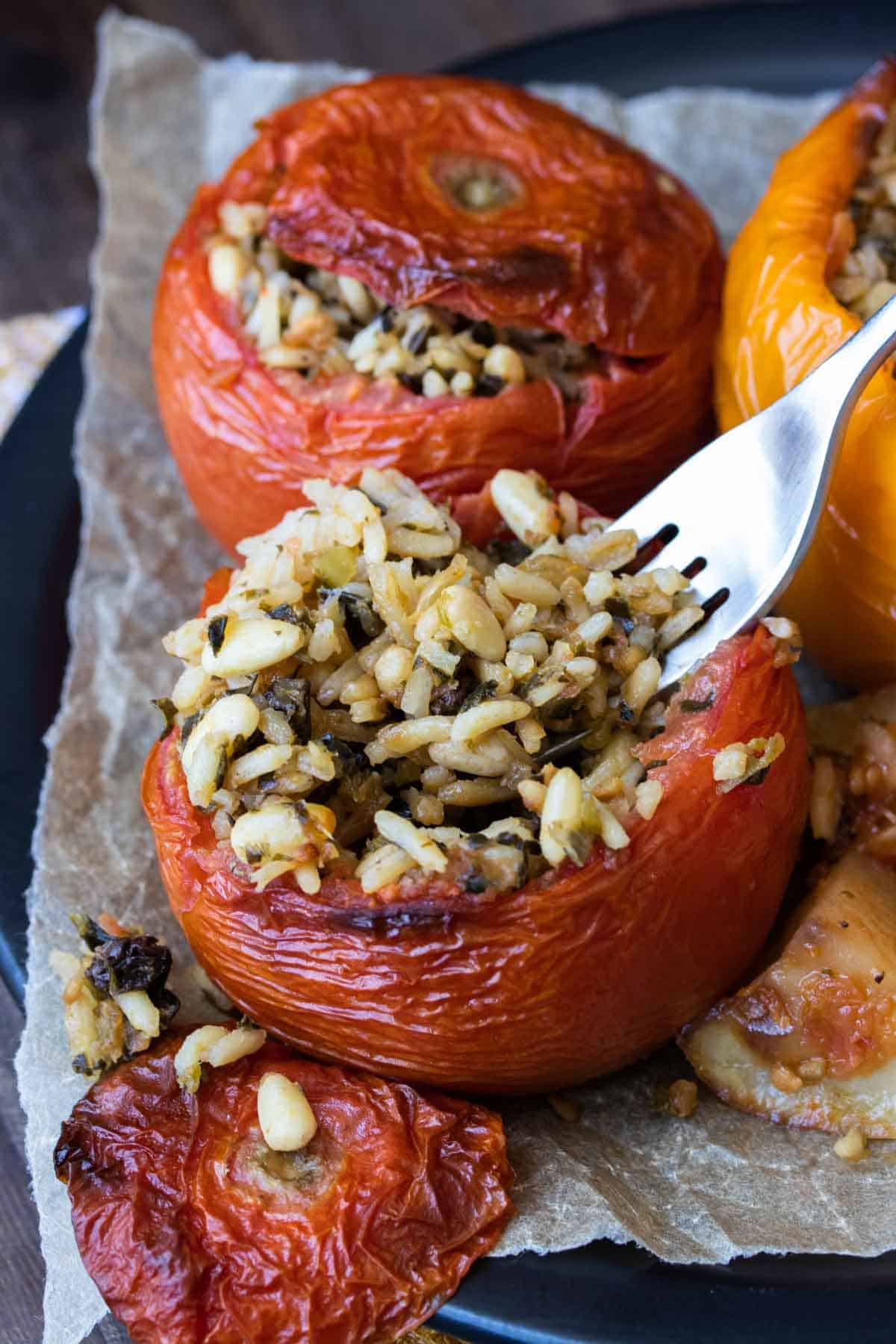 Tricks and tips to making the perfect stuffed peppers and tomatoes

Although this recipe is really quite simple, it can get tricky when getting everything baked just right. I am not a fan of mushy rice, we like al dente all the way. Make sure to follow each step carefully so you end up with perfectly cooked Greek yemista!

When you remove the insides of the tomatoes, make sure not to scrape too much out or they will collapse when baking from being too thin. You also need to get enough out so you can fill it. I know, it’s a mind F. My tip is to use a grapefruit spoon if you have one, it’s a spoon with a serrated tip and it really helps scrape out the tomato pulp.

I like to chop the tomato pulp with a food processor. It gives you a small even chunkiness and releases the right amount of juices. You can also chop the kale and herbs in with it for the perfect texture.

When precooking the rice, you want the end result to be cooked half way. This is the right amount so that it doesn’t underbake in the oven. If you don’t precook the rice enough, then you have to bake the stuffed peppers and tomatoes really long which yields overly soft tomatoes and peppers. You want them to keep their structure a bit, not be overly mushy. If you pre cook the rice too much, you get mush. Yuck. 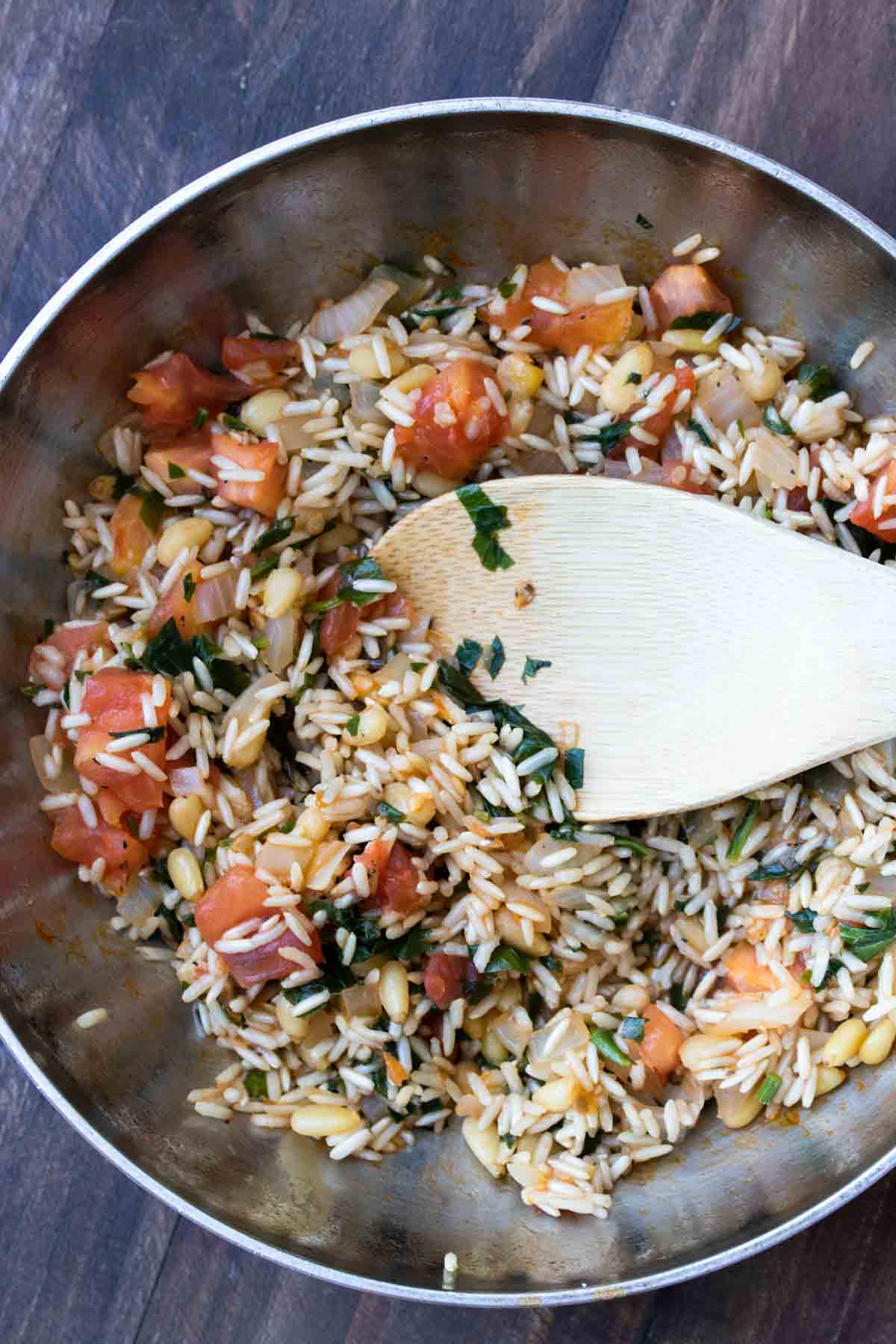 Speaking of rice, the recipe is written using a long grain rice like jasmine. If you use long grain brown rice, you will need to add more water when precooking and keep adding until you taste the rice and it is perfectly cooked half way. Long grain rice is sturdier and gives a more al dente texture. Short grain rice is chewier and not the best choice here unless that’s what you want. 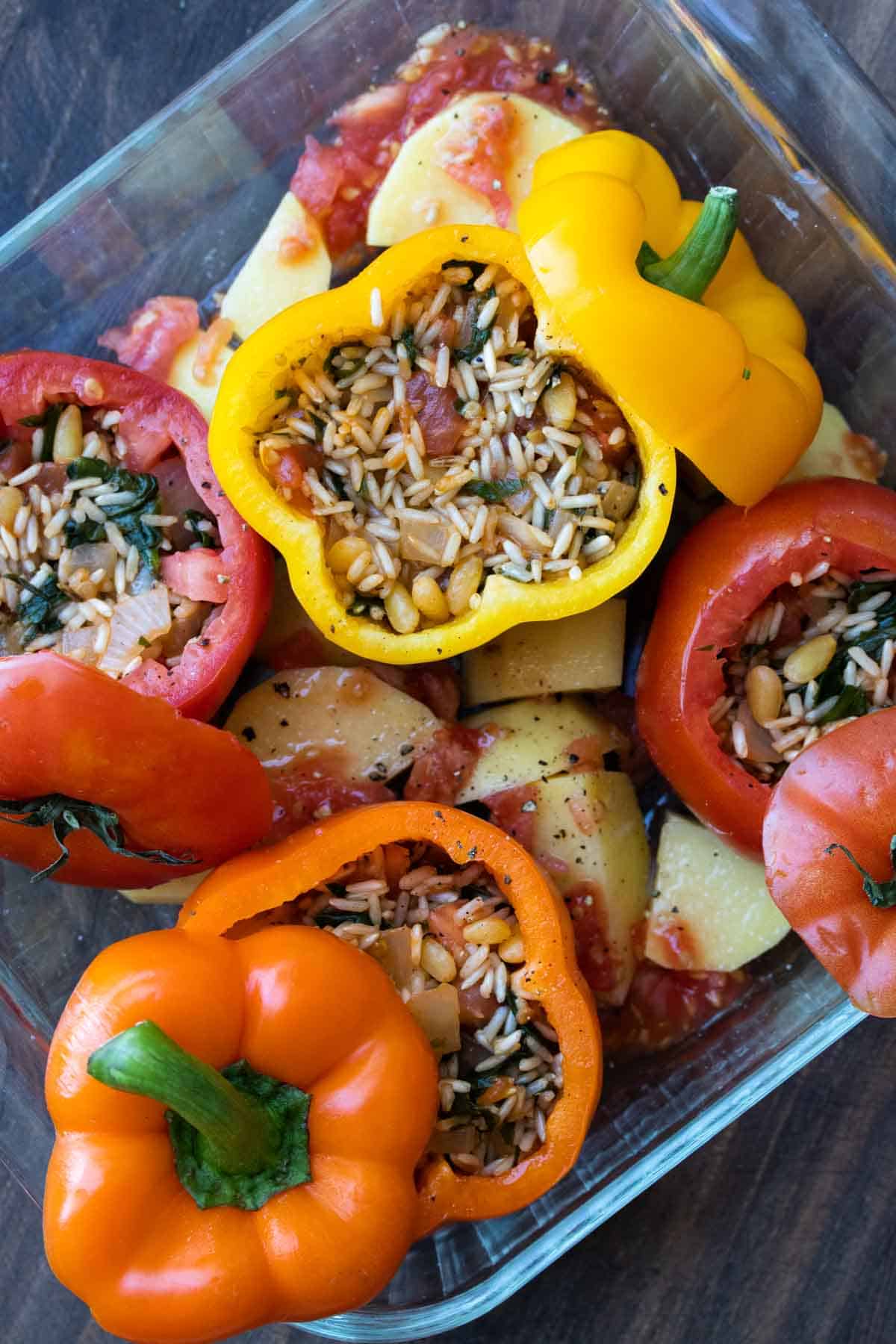 Ok, now you are armed with the secrets. Time to make these vegan stuffed tomatoes and peppers happen. Get yo self in the kitchen!

If you’re looking for some other awesome Greek recipes gone vegan, check these out: 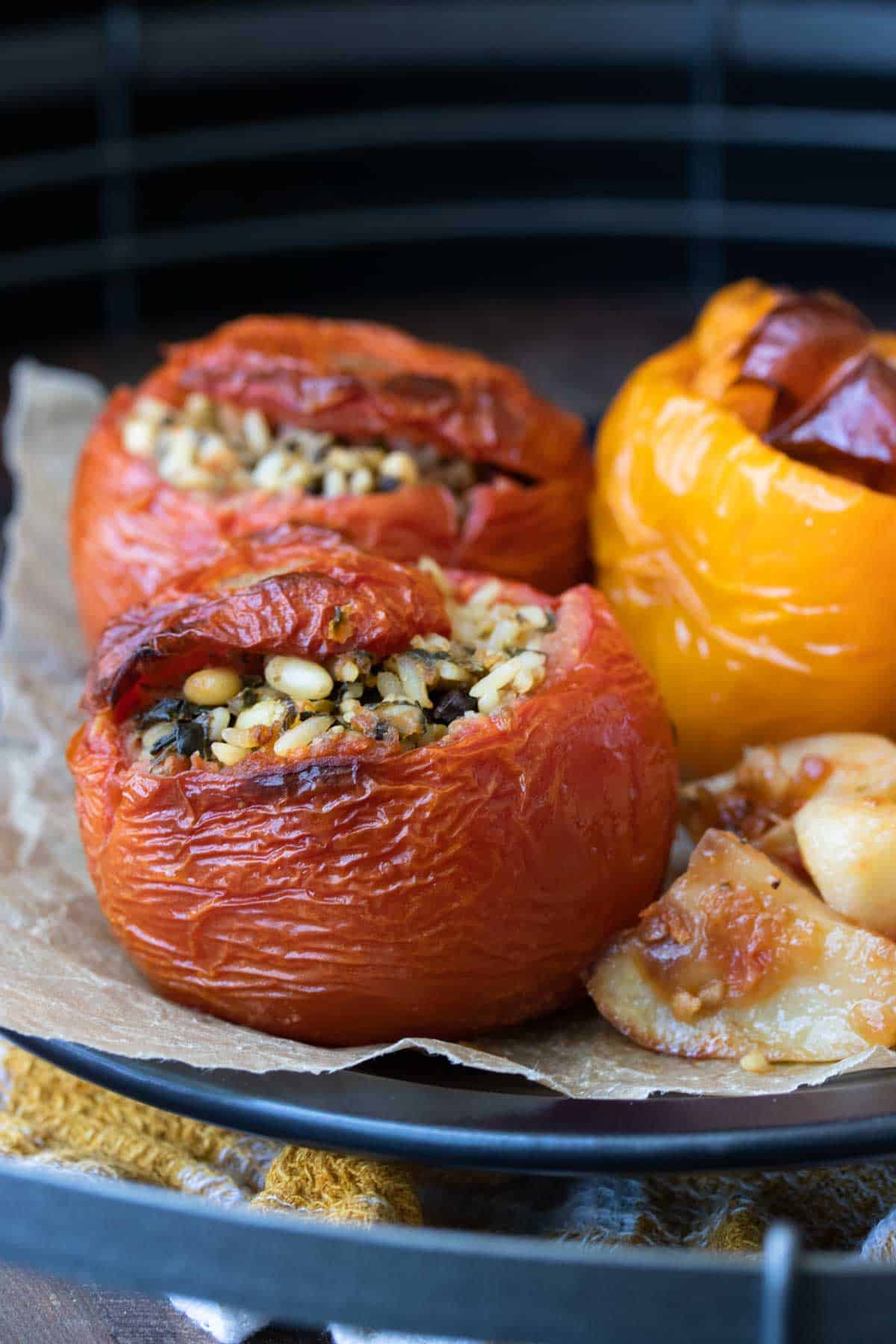