This authentic Greek recipe has gotten a makeover and is better than ever. This vegan spanakopita is hands down the absolute best you've ever had! 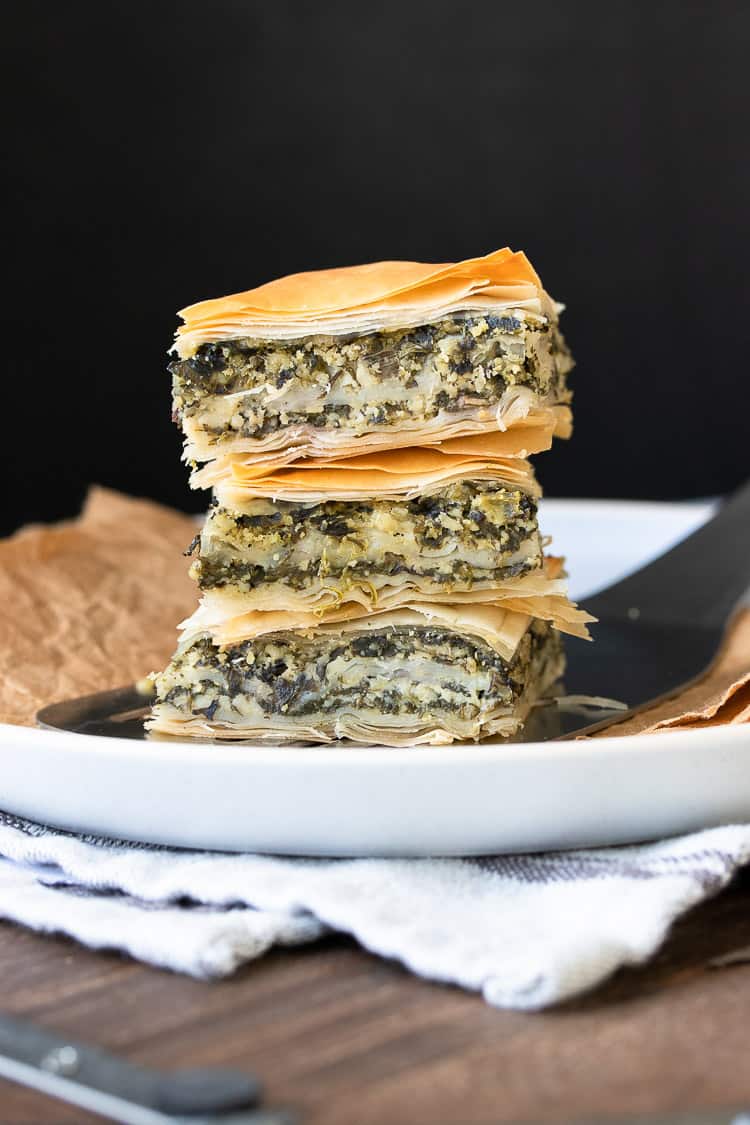 My mom has a famous spanakopita recipe. It's the only one I will eat, and anywhere she goes people ask her to bring it. My friends ask for it for their birthdays and my boys will take down the entire pan in a matter of minutes. I have wanted to make it vegan for years.

Well, it happened. And it happened hard. The true test was giving it to my boys who often eat her original version with feta. Let's just say that they asked me why I can't make "pita" like yiayia does. I may have danced in my kitchen like a fool.

I grew up eating my mom's spanakopita on a weekly basis, and now my boys take it down like hungry lions. It's as much a staple in our lives as water. I have always wanted to try a vegan makeover but it's such a coveted recipe that I was afraid to attempt it.

Well, lately I have been working with this incredible business coach, turned good friend, that has helped me tackle all these fears of mine that have been holding me back in scaling my business. So I decided, tackling this vegan spanakopita version was step one to my growth. And dang, I nailed it!

How do you mimic feta with a dairy free alternative

So feta is really just salt and tang. As much as I am against pretend feta (there is no recipe I found out there that comes close) in this vegan feta recipe all I needed to do was recreate the flavor because the texture is simply a ricotta like mixture.

One of my mom's personal twists in her original Greek spanakopita, is that she uses half feta and half cottage cheese to lighten up the filling. She has always done it this way so I knew that I could recreate that texture with cashews.

The flavor was easy, white vinegar gave the tang I needed and salt gave it that authentic saltiness. I left out the egg because you really don't need it for texture, but the rest of the recipe I followed as is.

The process itself is really quite easy, but there are multiple steps to getting it just right:

The kind of phyllo you use doesn't really matter, but I have found that the thicker phyllo sheets are easier to work with and come out a bit better. So if you have a choice, try finding a package that says "thick" or "#9 thick" to signify a thicker phyllo sheet.

If you like this Greek recipe turned vegan, don't miss all the others I have created too!

And if you love to eat food that tastes good but is actually healthy, check out this post! 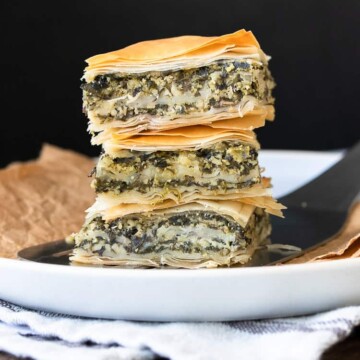 Tips to prep ahead: