These incredible cinnamon sugar vegan donuts are easy to make and baked to perfection. Both the regular and gluten-free donuts have an unbelievable texture! 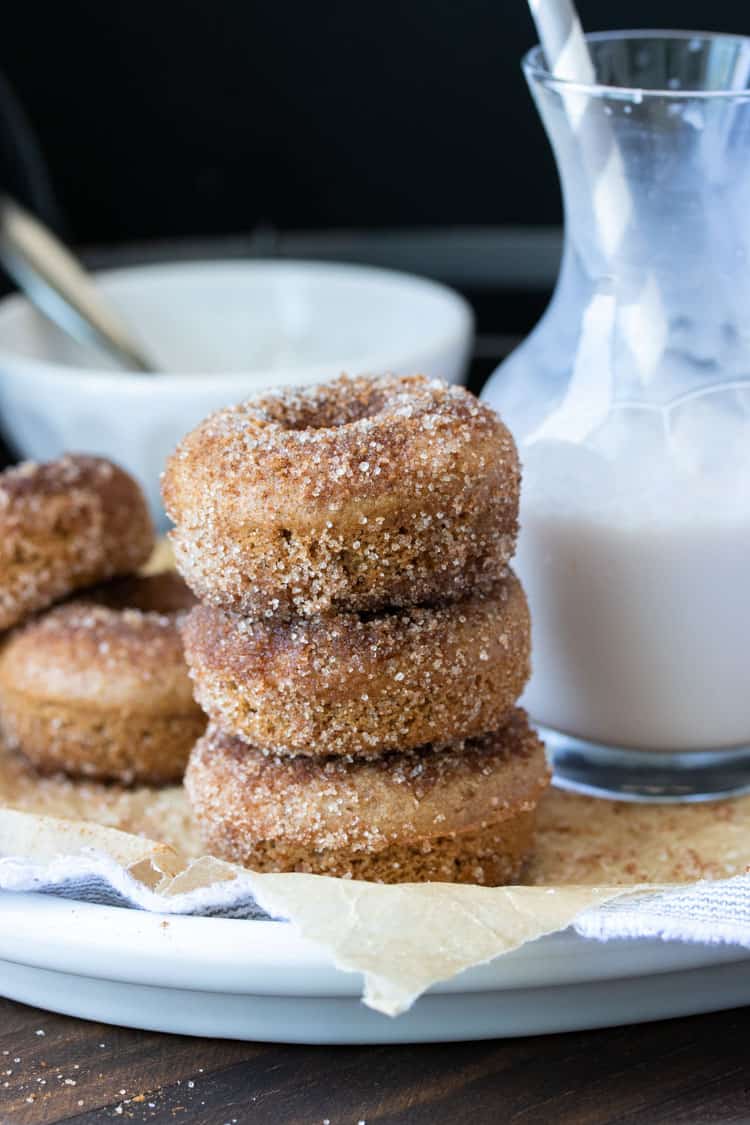 This is a cookbook review written by me on behalf of Melanie McDonald, for which I received a free copy of the book. All the opinions and text are my own.

These cinnamon donuts are insanely delicious. I love the combo of cinnamon and sugar in basically anything, but covering light fluffy homemade donuts has to be one of my favorite!

I have not always been a donut lover. The one place I eat them is a little bakery over by me, but other than that they haven't been my choice treat. But when I started making them at home, the story changed!

I started my donut journey with these vegan pumpkin spice donuts. And I was hooked! So when I got the chance to review my friend Melanie's new cookbook, Vegan Comfort Cooking, I knew I wanted to share the cinnamon donut recipe. 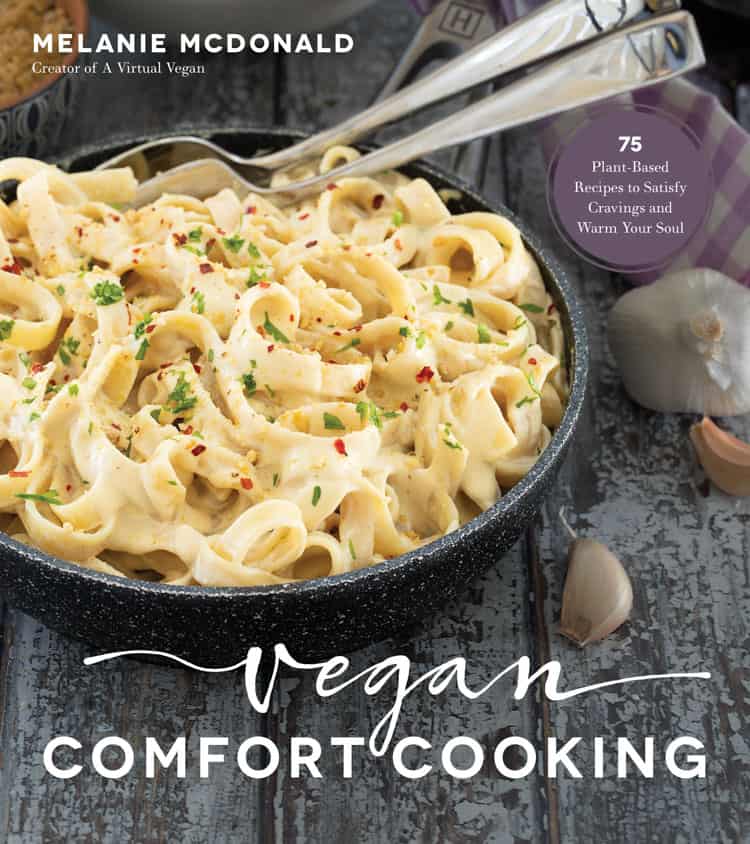 Melanie's book is filled with 75 vegan recipes focusing on comfort foods to warm your soul. The recipes range from brunch to main dishes to dessert and everything in between. I love the unique names of her sections, like "Sweet Talk" for the dessert section!

Some of the recipes that sound amazing to me are:

But these cinnamon donuts were the ones that won me over. The only thing I did to alter the recipe, was make these donuts gluten free.

Since these are originally made with all purpose flour, and we don't usually bake with that, I figured it would be great to have a gluten free version for all of you that come here for that. So lucky you, you get two versions of one recipe!

Generally speaking, I wouldn't call donuts a health food. Regular donuts are often fried in oil, making them something you shouldn't make a regular daily snack.

But since I thrive on sharing recipes for traditionally unhealthy options that are made healthier (healthier being the key), this vegan donut recipe is of course a much better choice when grabbing a donut.

I used a combination of gluten free oat flour and almond flour to get the perfect gluten free texture for these. And I subbed coconut sugar for the white sugar. I also tried making them with half cane sugar and half coconut sugar and that worked great as well.

This recipe also calls for vegan butter to help the coating stick, but gives the alternative to coat without it.

Other than that there is nothing in these that is considered unhealthy. And I can assure you that they are amazing! What donuts are vegan?

Any donut that doesn't use animal products as an ingredient is considered vegan. The ingredients that you could find in a donut that would not make them vegan are eggs, butter and non vegan sugar.

How do you store vegan donuts?

Make sure you allow these to cool completely before storing. You can leave them on the counter to cool. Once cooled, store in an airtight container.

These are also freezer friendly. Wrap them in parchment, foil and then put in a freezer bag or a sealed airtight container. Once you are ready to eat them, defrost to room temperature and warm in the oven for about 5 minutes.

How long do vegan donuts last?

Even though these are best fresh, and most likely will be eaten in entirety, you could keep these in a sealed container for a few days. If you don't think you will eat them in this time frame, first make sure you do in fact have taste buds, and then freeze leftovers.

These donuts are so easy to make! I cheated because I'm lazy like that and even skipped a step and they turned out amazing! 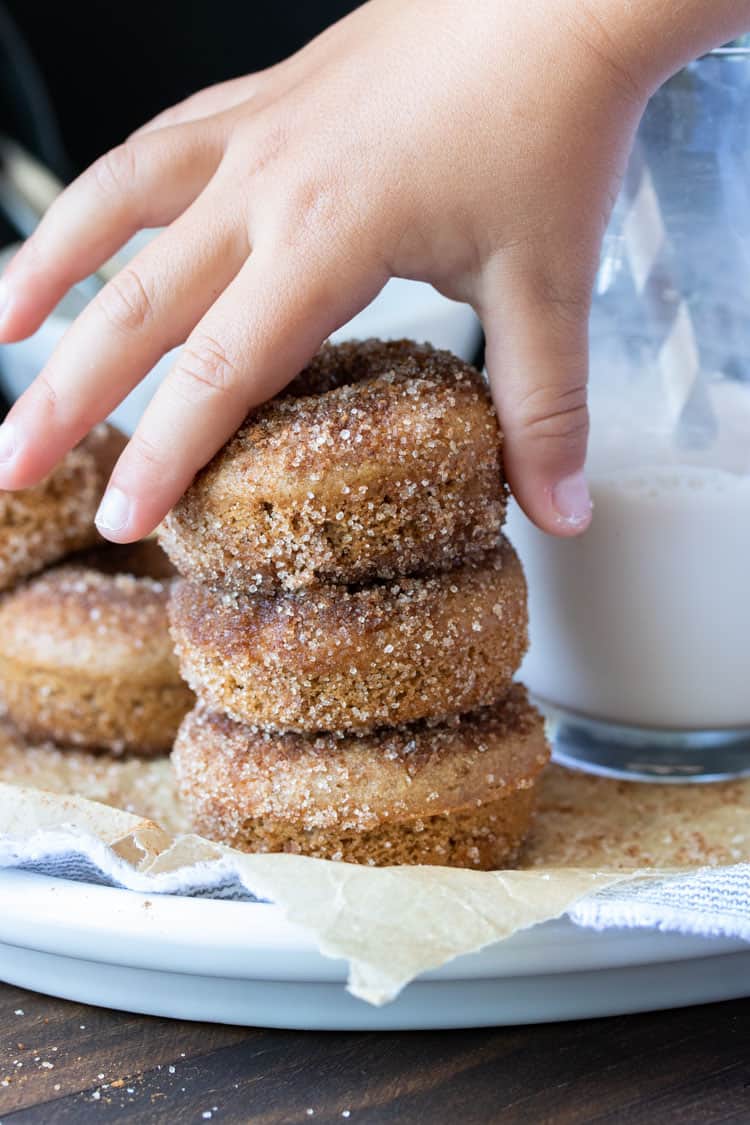 Tips for coating the donuts

There are a few ways you can coat these, using butter to get them to stick or keeping them a little healthier and skipping the butter. Here are a few tips I found when trying both:

Other flavor and topping ideas

These donuts are easily changed up with different delicious fall spices and other toppings. I actually didn't have the nutmeg it calls for the first time I made them so I used other spices. Here are some ideas:

I also think these would be great with vegan donut glaze like this easy cinnamon glaze! 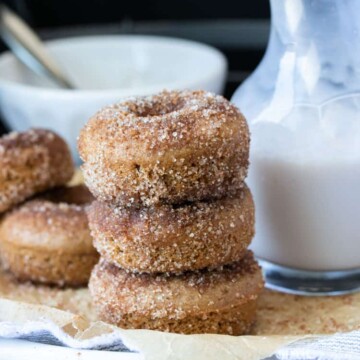 Sophia DeSantis
There is nothing quite like fresh, warm donuts, and with this recipe, you get perfectly soft and fluffy donuts with no deep-frying. They are baked in the oven, but by the time they have been dipped in melted vegan butter, and rolled in their warming, comforting cinnamon-y sugary coating, they taste as if they had been fried. If you cook oil-free, I give instructions for how to make them without the butter; and if you don’t own a donut pan, don’t worry. You can bake them as muffins or as donut holes in a mini muffin pan instead.
5 from 3 votes
Print Recipe Pin Recipe
Prep Time 15 mins
Cook Time 15 mins
Total Time 30 mins
Course Dessert
Cuisine American
Servings 6
Calories 245 kcal