This vegan spinach artichoke dip is so creamy you won’t believe it’s dairy free. Made with whole food ingredients, it’s healthy and delicious!

This recipe was originally published on 9/16/18

Taking the dairy out of traditional dairy filled foods can be tricky, but with a little creativity you can remake your favorite traditionally unhealthy recipes in a healthy whole food way.

It’s amazing what plants can do. If you haven’t realized it already by browsing this site, and many awesome others, you really can fool people into thinking things have dairy, when in fact they don’t!

Vegan spinach artichoke dip is a little different than the traditional version. You need to blend up that creamy base before you can mix it all together. Of course, you can use ready made vegan cream cheese but it won’t be as good or as healthy.

I like to add some extra flavor to this dip by topping it with Vegan Parmesan and crushed red pepper, then serving it with any of the following:

You can also enjoy this recipe as more than a dip! Try:

Make ahead and storage tips

How do you make spinach and artichoke dip from scratch?

The traditional version is usually some mix of cream cheese, mayo, sour cream and regular cheese. To make a vegan version, one made with whole foods, I had to take a different approach. I used a base of potatoes, cashews, and white beans for an irresistible creamy base that is also healthy. I also added the option of topping this vegan spinach dip with my grateable Parmesan, it really adds an extra layer of flavor to this dip.

Is Spinach Artichoke Dip bad for you?

The traditional type can be, as it’s generally made with mayo, cheese, and sour cream. This version uses only plant based, whole food ingredients for a healthier alternative.

Are you supposed to heat up spinach and artichoke dip?

Most spinach artichoke dips are served warm, but there’s no one right way of eating it! Serve it chilled as well if that’s what floats your boat.

How long can Spinach Artichoke Dip sit out?

Dairy filled spinach artichoke dip includes ingredients that can spoil if left out too long. Once it has cooled, the general rule of thumb according to the USDA is a few hours.

However this vegan spinach artichoke dip has no dairy in it. The base is vegetables and nuts so the risk of it spoiling is much lower. If you want to be ultra safe, then follow what the USDA recommends, but I have left this dip out at a party for the evening and it was still perfectly safe to eat.

Whether you need an appetizer for a party or just something to shake up the after school snack game, these plant based recipes have you covered: 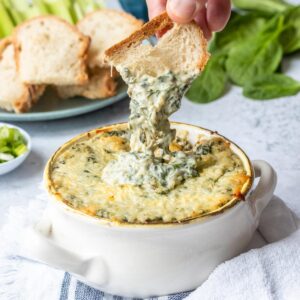 Tips to prep ahead: Make Parmesan if using. Soak cashews if not using a high speed blender.

Never miss a recipe!Sign up here and get a FREE quick and easy meal guide!
2.5K shares
« How to Transition to a Plant Based Diet
Easy Vegan Broccoli Casserole »